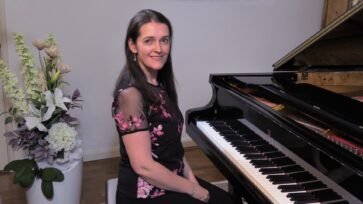 Rachel Billings is author of the All-In-One music theory series of books. Rachel graduated with Honours in music from the University of Manchester in June 2000 followed by an upper division diploma (2001) and postgraduate degree in performance (piano) at the Royal Northern college of Music in 2003. Rachel was awarded a Fellowship of the Victoria College of Music (FVCM) in 2018 for her ‘Services to Musical Education’ due to her work on All-In-One music theory and, in particular, for writing a new music theory syllabus for Victoria College which is based upon All-In-One music theory. Nowadays Rachel is proud to be an online tutor at Piano at  Piano and Strings Tutors London (pianoandstringslondon.com).

All-In-One Music Theory was originally written for the benefit of Rachel’s own private pupils but soon proved very popular in weekly lunchtime theory classes taught at a nearby local Girls’ grammar school. Rachel has a love for art which has naturally influenced All-In-One (All-In-One to Grade 5 itself includes no less than 130 illustrations) yet Rachel is a firm believer that drawings/paintings should always aid tuition and never be trivial decorations. Illustrations throughout the book reinforce important concepts learnt (a few examples of Rachel’s drawings can be seen on this website . Also information can be found at MeWe.com  (under ‘Groups’ > Aaron publications. MeWe offers an equivalent service to Facebook). Personal favourite artists include Shirley Hughes (author and illustrator) and Salvador Dali.

Rachel Billings taught in the North-West until she married in 2013 and moved to Warwickshire where she is now the busy mother of two young children.  Rachel welcomes comments/ feedback about the All-In-One series from either teachers or students. Rachel is pleased to be able to communicate with students of her books on MeWe.com site, whose purpose is also to function as a HELP FORUM, and to provide a degree of help if students get stuck (it also helps her know if/where any improvements can be made). All messages are carefully considered and help Rachel to improve each edition.