The importance of music theory; it helps many musicians perform better and provides a window into the composer’s mind and intentions.

The first reason is easy to understand; lack of time. There is already much to fit into an instrumental lesson; exercises, instrumental studies, pieces, aural training… The list goes on. Theory is too often tagged on at the end or forgotten altogether (until the exam date looms!).

Secondly, there is a real fear from the teacher that they will bore their student if they open a theory book. After all, isn’t music theory boring? Many people assume that it is and sadly this attitude is found in many teachers (and propagated since many teachers teach as they have been taught themselves) . The problem is that theory is taught by rote and people are used to the old “jigsaw method” whereby dry snippets of information are given bit by bit, in the hope that they will eventually piece together and make sense to the student. For many that day never comes!

Also, thirdly, a few teachers worry that the parent may misunderstand if they devote more time to music theory. After all, isn’t the child being sent to an “instrumental” lesson? Will the mum or dad object if occasionally the instrument is put to one side and they spend half their time looking at a theory book?

Obviously, it is hard, if not impossible for a musician to write a piece of music if they have little theoretical knowledge. Which time signature is best to use? How do you group the notes, rests and beam the tails accurately? How do you indicate your intentions? Basic knowledge is essential if the music is to be written clearly and legibly. Grade 5 theory also involves some knowledge about orchestral instruments in general. It is ludicrous to write a piece for clarinet which cannot be performed because the notes are either too high or too low for the instrument. It would be silly to write ‘accelerando’ (which means get gradually faster) when you in fact wish to tell the performer to slow down (‘rallentando’). The importance of music theory for composers should be obvious.

Some musicians may object to any mention of the dreaded two words “music theory” and respond; “But I’m not a composer, why bother? Anyway, I learn theory whilst learning a piece of music”. That is true, to a certain extent, but the result is often mere surface knowledge. Yes, you may be told that 12/8 time signature means count four dotted crotchet beats in a bar or that the current piece you are learning is in B major, which has five sharps. But does that make sense? It has proven hard to remember rules presented in such an abstract fashion. But not only that; can you be satisfied with such meagre understanding? Don’t you wish to know why these particular numbers are chosen and the reason such rules and conventions exist?

Too often the response is; “Music theory isn’t important, let’s just get on with playing the instrument!” But knowledge of music theory should be an essential ingredient in any music lesson since it can help a person to play better on their instrument. This statement should not be misunderstood! Of course some students, with a good ear, know instinctively how to phrase and shape a melody without much knowledge of music theory. However, for other students, to whom this does not come naturally, a little knowledge of the building blocks used to write a piece of music, whilst not guaranteeing a musical performance, can only be beneficial. Music theory, after all, is largely about how music works. All musicians (even non pianists!) should know a little about chord progressions and the direction/feeling produced by certain chords written in a particular order  ( so called ‘harmonic progressions’). Certain chords naturally create the feeling of tension and relaxation which in turn dictates the way the melody is shaped. At the basic level, this knowledge is about cadences. For example, an ‘Interrupted Cadence’ (chords V-vi) creates the feeling of instability, whilst a ‘Perfect cadence’ (V-I) feels final and complete.

Some chords are unusual for the period in which they are written; for example a ‘diminished chord’ in Classical music. It is good to be aware that the composer intended this chord for dramatic effects. Anyone would find it helpful to memorize a piece of music if they know about its structure and we should recognize brief but important pivot chords (that perhaps suggest a moment of hesitation in performance) which are responsible for changing the entire course of a piece of music and setting it off on a different emotional route.

Do you agree? (Comments welcome below)

Please read the Preface page from My own music All-In-One Music theory books , which explains the need I felt to write All-In-One music theory. The  All-In-One Music Theory Books explore simple rules and Patterns which apply across the Grades, avoiding as much as possible a segmented/learning by rote approach

Differences (as well as similarities) between ABRSM and Trinity College London Music theory syllabuses can be seen on the graded checklists which are displayed at the beginning of the All-In-One music theory books. 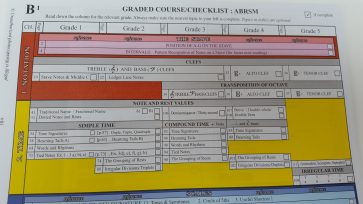 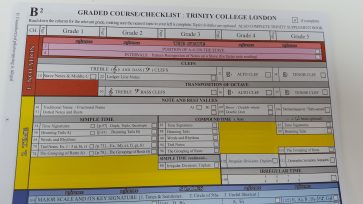 There are some similarities as well as differences between ABRSM and Trinity College London theory exams.  ‘All-In-One  music theory’ books (THIRD ed), unlike most others, are suitable for BOTH Associated Board (ABRSM) and Trinity College London students. One reason for this is that students can easily navigate their way through the grades for either examination board by referring to the Graded checklists at the front of the book (and tick off the topics when they have been completed).

ABRSM is the most popular examination board yet Trinity College London exams are equally recognised qualifications. Trinity is perhaps most suitable for instrumentalists learning pop music or jazz due to its inclusion of jazz chord symbols (as well as Roman notation). It focuses upon composition (at an earlier stage) via adding a bass line to a melody or vice-versa. Trinity students, unlike ABRSM students, are expected to know about ostinato (common in jazz music) , syncopation, sequences (real and tonal) the ‘natural minor’ and pentatonic scale, inverted intervals, arpeggios, broken chords and a little about the guitar and saxophone.

The All-In-One series of music theory books contains a Trinity Supplement booklet with topics closely related to those already studied in the main book (e.g. ‘broken chords’ can easily be understood by anyone with knowledge of the tonic chord and inversions). Therefore anyone, not just Trinity students, will find the ‘Trinity Supplement’ highly beneficial and the next logical step.

1. Students using All-In-one: Grades 1-3 and Grades 4-5 book do NOT require the additional Trinity Supplement booklet because these books already contain this material in the Appendix).

(Our All-In-One music theory books, unlike most others, are suitable for students studying for either ABRSM or Trinity music theory exams. Click here to read more)

ABRSM is an acronym for ‘Associated Board of the Royal Schools of Music’. ABRSM music theory exams take place in 93 different countries around the world. In the UK they take place times a year in the Spring, Summer and Autumn (known as periods A, B and C).

Trinity College London provide exams and award qualifications in over 60 countries around the world. The music theory exam dates are as follows:

How to enter an exam. You can enter yourself for a theory exam if you are age eighteen years or older. Alternatively candidates may be entered for an exam by a school, a teacher of music, a parent or guardian. Anyone who enters receives a unique applicant number. For details about ABRSM exam centres in your area speak to your local ABRSM representative  or Trinity College London representative . Apply for entrance online using the ABRSM or Trinity Guildhall websites (or you can request a postal application form).

Accreditation. Both Associated Board and Trinity qualifications provide qualifications recognized by government educational authorities worldwide. A pass at Grade 5 (music theory) enables students to proceed to Grade 6-8 exams which can contribute towards higher education through the allocation of UCAS (University and Colleges Admission Service). UCAS points which can be used as part of a university or college application in the UK.

Please bookmark our site or join us on twitter to receive updates about forthcoming music theory exams. Feel free to ask the author any last minute questions you may have.

We are also very keen to hear from students who have used All-In-One to Grade 5 to pass their theory exams (a distinction we trust!).